One thing I love is when I think I understand a topic well, and then someone proves me quite wrong. That was more or less what happened when James Forshaw published a blog on Kerberos relaying, which disproves my conclusion that you can’t relay Kerberos from a few years ago. James showed that there are some tricks to make Windows authenticate to a different Service Principal Name (SPN) than what would normally be derived from the hostname the client is connecting to, which means Kerberos is not fully relay-proof as I assumed. This triggered me to look into some alternative abuse paths, including something I worked on a few years back but could never get to work: relaying DNS authentication. This is especially relevant when you have the ability to spoof a DNS server via DHCPv6 spoofing with mitm6. In this scenario, you can get victim machines to reliably authenticate to you using Kerberos and their machine account. This authentication can be relayed to any service that does not enforce integrity, such as Active Directory Certificate Services (AD CS) http(s) based enrollment, which in turn makes it possible to execute code as SYSTEM on that host as discussed in my blog on AD CS relaying. This technique is faster, more reliable and less invasive than relaying WPAD authentication with mitm6, but does of course require AD CS to be in use. This blog describes the background of the technique and the changes I made to krbrelayx to support Kerberos relaying for real this time.

If you’re familiar with Kerberos you know that DNS is a critical component in having a working Kerberos infrastructure. But did you know that DNS in Active Directory also supports authenticated operations over DNS using Kerberos? This is part of the “Secure dynamic updates” operation, which is used to keep the DNS records of network clients with dynamic addresses in sync with their current IP address. The following image shows the steps involved in the dynamic update process:

The steps are as follows (following the packets above from top to bottom). In this exchange the client is a Windows 10 workstation and the server is a Domain Controller with the DNS role.

Let’s take a closer look at steps 5 and 6. The TKEY query is actually sent over TCP because its quite a bit larger than the maximum 512 bytes allowed over UDP. This is primarily because of the rather large TKEY additional record, which contains structures we often see for Kerberos authentication: 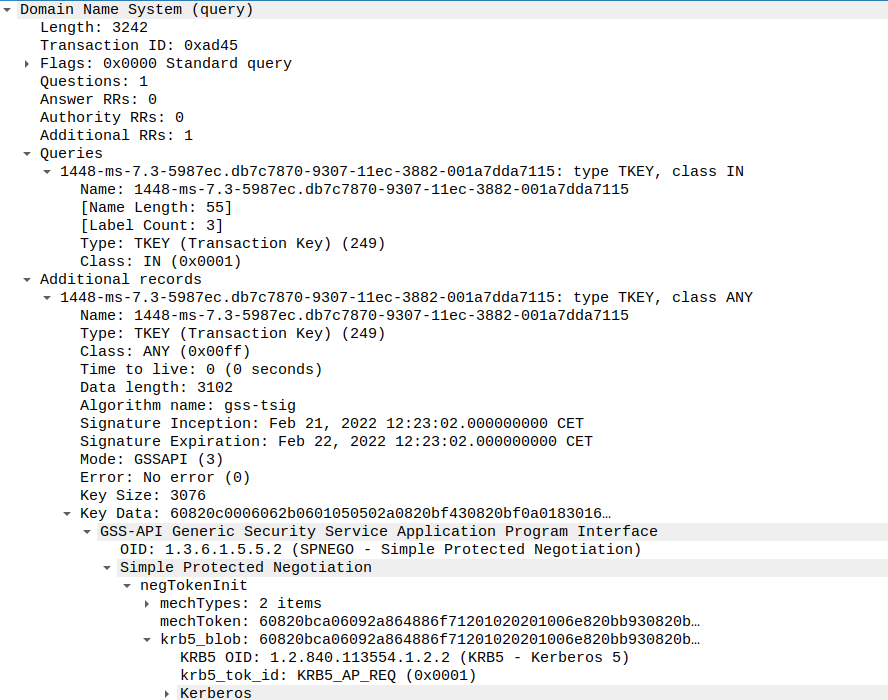 It turns out this query contains a full GSSAPI and SPNEGO structure containing a Kerberos AP-REQ. This is essentially a normal Kerberos authentication flow to a service. The reply contains again a GSSAPI and SPNEGO structure indicating authentication succeeded, and replying with an AP-REP. This AP-REP contains a new session key that can be used by the client to sign their DNS queries via a TSIG record. Note that the encAPRepPart is normally encrypted with the session key that only the client and the server know, but because I loaded the Kerberos keys of various systems in my test domain into a keytab that Wireshark accepts, we can decrypt the whole exchange to see what it contains. 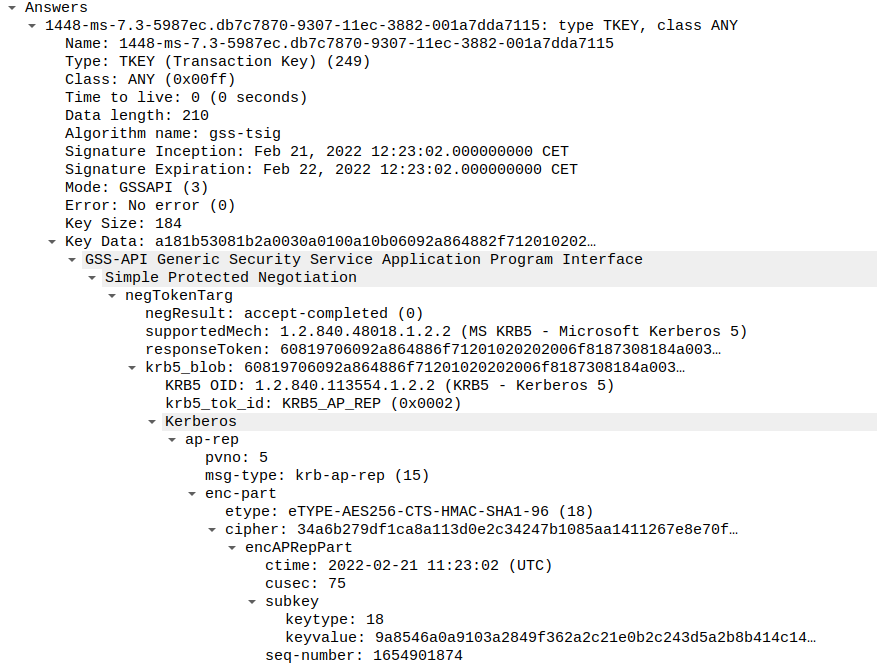 The concept of this flow is fairly simple (the actual implementation is not). The client uses Kerberos to authenticate and securely exchange a session key, and then uses that session key to sign further update queries. The server can store the key and the authenticated user/computer and process the updates in an authenticated manner without having to tie an authentication to a specific TCP socket, as later queries may be sent over UDP.

If we are in a position to intercept DNS queries, it is possible to trick the victim client into sending us a Kerberos ticket for the real DNS server. This interception can be done in the default Windows configuration by any system in the same (V)LAN using mitm6. mitm6 advertises itself as a DNS server, which means that the victim will send the SOA to our fake server, and authenticate using Kerberos if we refuse their dynamic update. Now this is where it gets a bit tricky. Usually the DNS server role will be running on a Domain Controller. So the service ticket for the DNS service will already be suitable for services running on the DC, since they use the same account and we can change the service name in the ticket. This means we can relay this ticket to for example LDAP. However, if we take a closer look at the authenticator in the TKEY query, we see that the flag that requests integrity (signing) is set.

This will automatically trigger LDAP signing, which makes the whole attack fail since we can’t interact with LDAP afterwards without providing a valid cryptographic signature on each message. We can’t produce this signature since we relayed the authentication and do not actually possess the Kerberos keys required to decrypt the service ticket and extract the session key.

This initially made me hit a wall for two reasons:

Revisiting this after reading James’ blog, I realized neither of these are an issue with todays knowledge:

With these 2 solved, there’s nothing really that prevents us from forwarding the Kerberos authentication we receive on our fake DNS server to AD CS. When that is done we can request certificates for the computer account we relayed, and use the NT hash recovery technique or the S4U2Self trick that I talked about in my previous blog. Using these techniques we can get SYSTEM access on the victim computer, which effectively makes this a reliable RCE as long as an AD CS http endpoint is available for relaying.

Changes to krbrelayx and mitm6

Originally, krbrelayx was not really a relaying tool. Instead it was capturing Kerberos TGTs by using unconstrained delegation configured (system) accounts, and using those TGTs in the same manner as ntlmrelayx can use incoming NTLM authentication. Since there is now a use-case to actually relay Kerberos authentication, I’ve updated the functionality in krbrelayx to make it possible to run in relay mode instead of in unconstrained delegation mode. It will actually default to this mode if you don’t specify any NT hashes or AES keys that could be used to extract information from incoming Kerberos authentication. In short, krbrelayx can now be used to relay Kerberos authentication, though only relaying to HTTP and LDAP is supported. As for mitm6, I’ve added the option to specify a relay target, which will be the hostname in the authorative nameserver response when a victim asks queries the SOA record. This will make the victim request a Kerberos service ticket for the service we are targeting rather than for the legitimate DNS server.

One thing to note that this works best when the AD CS server that is targeted is not the DC that the victim is using for Kerberos operations. If they are on the same host (such as in smaller or lab environments) targeting the server which is both a KDC and AD CS server may result in the victim sending it’s Kerberos ticket requests (TGS-REQ) to you instead of the DC. While you could proxy this traffic, this is beyond the scope of this project and you may end up not getting any authentication data.

There is one final hurdle that we have to take. The Kerberos AP-REQ actually does not tell us which user is authenticating, this is only specified in the encrypted part of the Authenticator. So we don’t know which user or machine account is authenticating to us. Luckily for us, this does not really matter in the default AD CS templates scenario, since these allow any name to be specified as CN and it is overwritten by the name in Active Directory anyway. To obtain the best results however, I recommend you scope the attack to one host at the time using mitm6, and to specify that hostname with --victim in krbrelayx so it will fill in the fields correctly.

Let’s see how this looks in practice. First we set up krbrelayx, specifying the AD CS host (in my lab adscert.internal.corp) as target, and specifying the IPv4 address of the interface as interface to bind the DNS server on. This prevents conflicts with DNS servers that commonly listen on the loopback adapter on for example Ubuntu.

Then we set up mitm6, using the name of the AD CS host as relay target:

We wait for our victim to get an IPv6 address and connect to our rogue server:

The screenshot shows the victim tried to update their DNS record, which we refused to do because of the lack of authentication. The authentication is sent via TCP to the DNS server of krbrelayx, which accepts this and forwards it to AD CS:

On the wire, we see the expected flow:

With this certificate we can use PKINITtools (or Rubeus on Windows)to authenticate using Kerberos and impersonate a Domain Admin to gain access to our victim (in this case icorp-w10):

This technique abuses insecure defaults in Windows and Active Directory. The primary issues here are the preferrence of IPv6 by Windows, and the bad security defaults on the AD CS web applications. These can be mitigated as follows:

mitm6 abuses the fact that Windows queries for an IPv6 address even in IPv4-only environments. If you don’t use IPv6 internally, the safest way to prevent mitm6 is to block DHCPv6 traffic and incoming router advertisements in Windows Firewall via Group Policy. Disabling IPv6 entirely may have unwanted side effects. Setting the following predefined rules to Block instead of Allow prevents the attack from working:

The default CertSrv site does not use TLS, this should be enforced first before further protections can be enabled. After enabling TLS with a valid certificte, enabling Extended Protection for authentication in IIS will prevent relay attacks. This should be enabled on all the web-based enrollment features of AD CS on all individual CA servers that offer this service.

All the tools mentioned in this blog are available as open source tools on GitHub.

Thanks to all the people mentioned in this blog and my previous posts on these topics for their research and tool contributions.